Is Carbon Dioxide the only greenhouse gas? 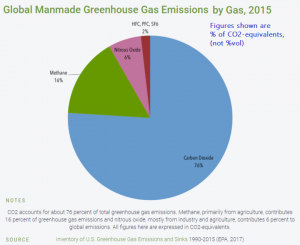 There are at least seven important greenhouse gases:

The global warming potential of each may be expressed as carbon dioxide equivalents (CO2-e) to be able to compare the various emissions with each other.

For example, the global-warming potential for methane is estimated between 25 and 83 (depending on the time period) and for nitrous oxide is 298 – emitting 1 million tonnes of CH4 and N2O respectively is equivalent to emitting 25 (or 83) and 298 million tonnes of CO2.