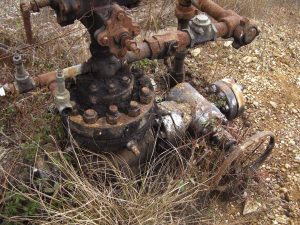 There are around 3 million abandoned wells in the USA, many in  Pennsylvania, Texas and California. Measurements show that many of these wells dating back to the 19th century are leaking substantial amounts of methane, which is 20 times worse than CO2 in terms of it’s greenhouse effect. The total leakage rate has not been estimated and it could be very substantial – “…based on that data, they estimate that emissions from abandoned wells represents as much as 10% of methane from human activities in Pennsylvania, about the same amount as caused by current oil and gas production. Also, unlike working wells, which have productive lifetimes of 10 to 15 years, abandoned wells can continue to leak methane for decades.”